Agreed. Very interesting set of answers on this guy, and directly names Shenmue in a list of innovative features of the Dreamcast.

Comes across as less stuffy and corporate than other game industry CEOs, which might actually be a good fit for Yu Suzuki who was always known to have eccentric methods that led to brilliance. 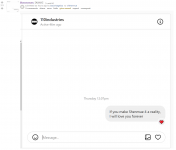 I can't imagine the sort of wrath they'll invoke if they aren't making Shenmue IV at this point. Like seriously

Nigel said:
Pardon my philosopher's thinking, but I suppose we ought (as with all things) consider a few lenses:

a. We're all antsy for S4, and the anime (though good) is stirring us up. It also helps that S3 broke what's (for many if not most of us) a nearly decades long fast. Ryo may begin to hope in supernatural forces, but we ourselves needn't hope in mere companies. Moreover, silence of certain Dojo members doesn't prove anything.
b. Video game media culture is exaggerative if not nightmarish right now. While nostalgia content is being pushed to an extreme (maybe this helps the case of S4 coming to be), some also troll for that purpose (Blue Box comes to mind). Some of you note that trolling to that degree is a company killer-- perhaps, but it's not above a company to risk building up hype. Admittedly, their tactic is interesting: it could go either way.
c. 110 doesn't seem to me to be trolling, but they could be obliquely trolling to build hype: a YS connection, but indeed some fantasy game YS wants to be put out. So too, it could be something non-Shenmue coming out in even as late as, say, 2024-5, and the hype is being built. Game, timeline, and other factors could let us down.

This could indeed be possible. I'll keep my eyes on this, esp. after the anime concludes, but let's not pretend this is still 2003. S3 came out, but one can still be duped. I'm biting my lip and hoping to be wrong.
Click to expand...

I'm simply enjoying the the idea that Shenmue IV still generates interest and clicks. That appears to be somewhat true based on multiple sites picking up this news. I am in on building hype even if this comes crashing down. The anime's about to finish, after a successful season, and people are hyped for Shenmue IV. I feel the magic in the air and want to capitalize.
Last edited: Apr 11, 2022

View attachment 14808
Their social media manager is still going along with it then
Click to expand...

No response though?
OP
OP

reacted the message which is a response of sorts

Never more have I wanted a timeline/fact sheet to be clear and concise about where we are. Teases and updates are coming in daily, so if one hasnt been done by tomorrow, I will throw something together. Also maybe keep the OP updated? I have been out of the game a long while, and the past few years have literally seen my life change. I don't even remember the TGS stuff from last year.

reacted the message which is a response of sorts
Click to expand...

i figure we're going to hear something at this point. the floodgates have opened and my fellow internet weirdos have tuned their ears. 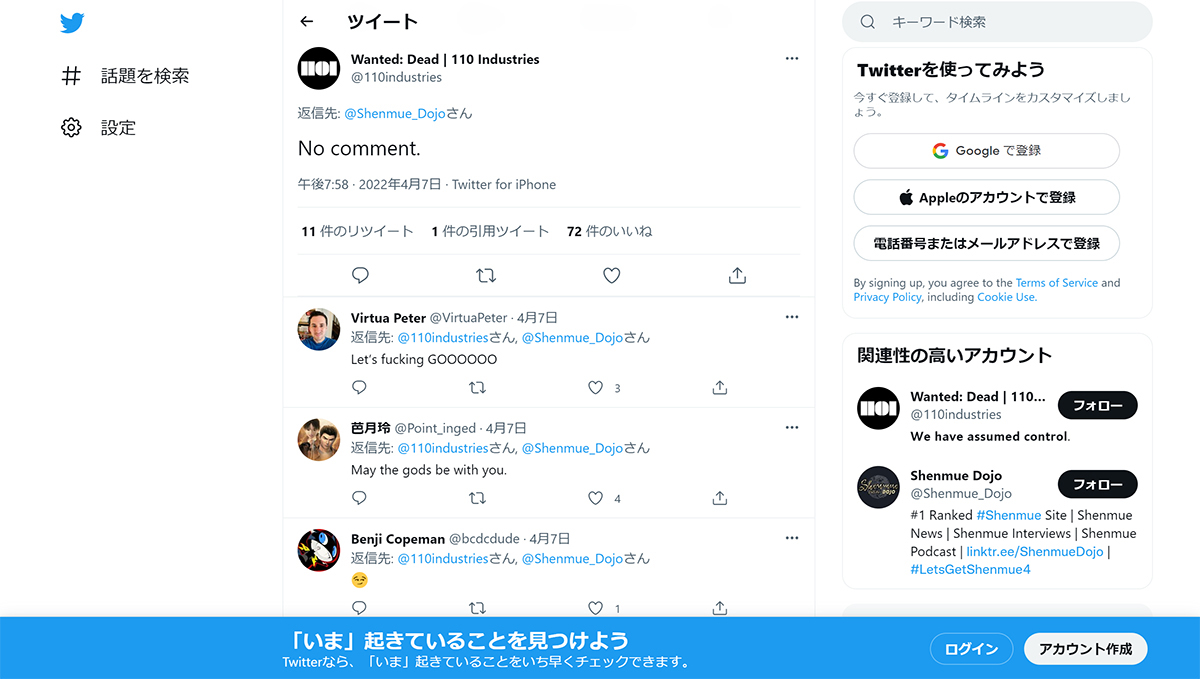 Man I'm starting to get that feeling when Shenmue 3 music starting playing in 2015...I can't believe this Is happening again so soon. I feel it's real guys.
S

Man, it’s one of those good times to be a fan. At least until the potential time when 110 says they were just trolling and they didn’t realize how much people took them seriously.
R

Longtime lurker, first time poster. This is feeling like Sept 2020 before the anime was announced and during 2014-2015 when there were many rumors about III (remember how allegedly Square Enix would revive Shenmue?)

My gut feeling: It's happening. I feel a Shenmue game related announcement (even if just that) is imminent. The question is: Will it be Shenmue IV or will in be a remaster/remake/reimagining of the whole saga that will release after the anime is completed? I may be in the minority, but I feel from the moment that the anime was announced and that Adult Swim/CrunchyRoll were involved, that the whole Shenmue story would finally be told in some way.

The reason I thinking it might be a reboot of the whole series is an effort to make the games more mainstream and perhaps reinsert story elements that may have been dropped. I wonder how much was compromised in the development of III due to budgetary challenges in order to get the game released (especially in the second half of Niaowu). Maybe a reset of the games would allow Suzuki to tell the story, but in a way in which the game feels less muddling.

Or maybe, it's IV. Who knows? I feel something big is about to go down and that we'll get a conclusion to the story is some way.

Man, this is all pretty exciting!

I'd be happy with any of these announcements :-D
OP
OP

Welcome! Apologies, your post got held in our approval queue there for some reason. But it should all be sorted now

I’ve been burnt too many times so I try and keep my expectations in check by holy moly are 110 social media really stoking those flames.

It has to be Shenmue 4. The series needs to look forward. At some point if they finish the narrative they can revisit directors cuts, remakes ect. I think the emphasis has to be on concluding Ryo’s story.

Just remember the likelihood is we won't hear anything official until the week of the season finale.

There's a possibility they COULD jump the gun, but I doubt it.

Also---I am going to go out on a limb and posit that it'll show up at Sony's showcase event, which will be anytime between now and June with E3 being canceled.

They invested in marketing and exclusivity for III and it was a boon for them. I see no reason they won't do it again, especially since it's been heavily suggested they are just as much about throwing money for exclusives and acquisitions as ol' M$.

Valascaziel said:
Just remember the likelihood is we won't hear anything official until the week of the season finale.

There's a possibility they COULD jump the gun, but I doubt it.

Also---I am going to go out on a limb and posit that it'll show up at Sony's showcase event, which will be anytime between now and June with E3 being canceled.

They invested in marketing and exclusivity for III and it was a boon for them. I see no reason they won't do it again, especially since it's been heavily suggested they are just as much about throwing money for exclusives and acquisitions as ol' M$.
Click to expand...

Eh, I wouldn’t put much hope in Sony. Even though they didn’t invest (heavily) into Shenmue III, they are very, VERY driven by Metacritic scores and sales figures. Don’t forget, they killed off Days Gone due to a 71% Metacritic and “only” selling 8 million copies (albeit over a slower period of time compared with something like God of War or Spider-Man) and washed their hands of a sequel. That was even with an eventual successful PC port.

Yes, they aren’t funding Shenmue, but to think they’d highlight a sequel to a game that no doubt underperformed (in their mind, not mine) would be naive IMO.

Then again, some genuine crap has been at their showcases before, so who knows lol.

Valascaziel said:
Just remember the likelihood is we won't hear anything official until the week of the season finale.
Click to expand...