Currently playing Yakuza 6 (Still) - been really busy with loads of other things, I literally haven't turned my consoles on for about 2 weeks now...that ends today!

Been playing xenoverse 2. It's a mediocre game for sure, but being a long term dragon ball fan I'm having fun with it. Its bright graphics feel refreshing too.

Recently (and finally) got a decent Xbox controller to play my Steam games with; was just using my PS4 controller before, but the emulation was pretty wonky.

So finally having that, I booted up Ace Combat: Assault Horizon, and I've been having a damn fine time with it. Only played about halfway through back when I first got it for PS3. 'Bout time I got back around to it. And being on PC, it's absolutely as pretty as it can be.
Old-timey Ace Combat fans seem to hate it, partly because it takes place in the "real world" (as opposed to the lightly sci-fi-tinged world of the rest of the series) and partly because of its DFM (dogfight mode) gameplay elements.
But lemme tell ya, as someone who's not normally into flight combat games, it's exactly because of the DFM elements that I find myself so enthralled with this particular game. It basically makes everything waaaay more visceral and exciting than the genre usually is. It essentially makes it so you can enter into a kind of limited rail shooter sequence with your enemies, engaging in high-speed, close-up chases through the sky without requiring that you have the reflexes of The Flash on cocaine. Rad as hell, and the camera does fun stuff like zooming behind your machineguns as you fire them, or following your missiles as they close in for a kill. Not to mention that it has all kinds of other variety too, like door-gunner sequences, bombing runs, and helicopter missions (that honestly play like a modern-day Desert Strike, Jungle Strike, or Urban Strike).
It's old by now (2013), but if you play stuff on Steam, give it a try if it goes on sale. Helluva lot of fun.

Didn't know it was on pc too, I had it on ps3 as well but only played 4 or 5 missions before abandoning it, I'll give it a whirl soon. Thanks Mr OL.

It's hard for me to think the PS3/360/Wii generation is over considering how many games from it are on my backlog, so I was thrown for a loop when I heard of the PS5/Xbone 2 being in the works. I thought the new gen had just begun, then I realized it actually started six years ago. How time flies.

I started Octopath Traveler today. I love this little JRPGem. It's the music. So unbelievably beautiful. It flows. It sparkles. Alfyn's saxophone!

Kiba said:
I started Octopath Traveler today. I love this little JRPGem. It's the music. So unbelievably beautiful. It flows. It sparkles. Alfyn's saxophone!
Click to expand...

I'm just over 10 hours in, couldn't agree more with you. The art style is amazing too, and the battle system works great. Up until now the story is a bit lackluster imo (without spoiling anything for you) it could improve tough.

I need to finish:


Which one should I tackle?
I'm literally in the middle of all of them save wise.
OP
OP

far cry 5 was the only game i didnt complete as i didnt like it. the rest are pretty good. uncharted lost legacy will probably take you the least amount of time to complete(?)

Nice, I'll have to check that out! I have always been a fan of the Strike series. Did you ever play Soviet or Nuclear Strike?

It's interesting to think that in the Mega Drive/Genesis days games with such mainstream popularity of the Strike or Road Rash series wouldn't survive much longer.

Especially Road Rash, which would seem like it would translate incredibly well in todays generation of gaming.

^^There's a game called... I think Road Redemption? That's on Steam and seems to have a big Road Rash vibe going for it.
I haven't played it myself, but I hope to get it eventually. Looks like it might be a little bit janky on the technical side, but I'm thinking it would still be fun to play with friends online. Glitchy stuff is like that sometimes.

Road redemption? Wow, I am surprised I haven't heard of it before! it even mentions it's the "spiritual successor" to Road Rash.
Judging by the clip I just watched it looks unreal!
I'll definately have to check it out, hopefully it gets a release on PS4 & Xbox
Last edited: Jul 31, 2018 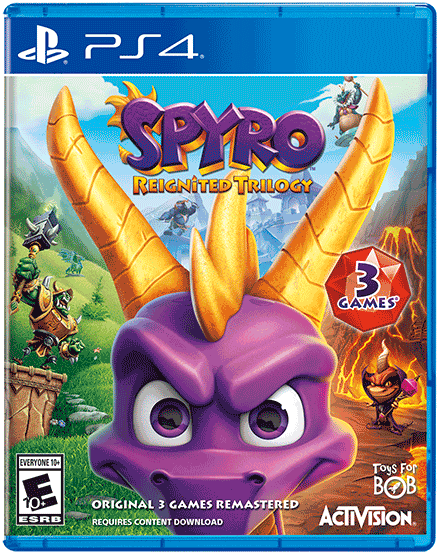 https://gematsu.com/2018/08/spyro-reignited-trilogy-requires-content-download-to-play-spyro-2-and-3
Turns out that only Spyro 1 will be on the disc and you have to download Spyro 2 & 3 via the store... Fed up with this S$%&! Pre-Order cancelled.

https://gematsu.com/2018/08/spyro-reignited-trilogy-requires-content-download-to-play-spyro-2-and-3
Turns out that only Spyro 1 will be on the disc and you have to download Spyro 2 & 3 via the store... Fed up with this S$%&! Pre-Order cancelled.
Click to expand...

That's insane, why would you release a game that requires a patch to access 2/3rds of it? Oh wait, let me guess, there will be a one time use download code to get the other 2 games.

Shame, I really wanted to get this game but I guess I'll have to pass.

Tip; if you haven't played Horizon Zero Dawn, do it. It's amazing. Love the game play, the fighting system. Love the expansion pack too.

SCQ said:
That's insane, why would you release a game that requires a patch to access 2/3rds of it? Oh wait, let me guess, there will be a one time use download code to get the other 2 games.

Shame, I really wanted to get this game but I guess I'll have to pass.
Click to expand...

it's puzzling. I thought at first there wasn't any space on the bluray (which likely isn't the case) or that the games are releasing later like telltale does with their disc releases (not the case either).

Only thing I can think is maybe they just didn't have the time to finish 2&3 when it came to prepping the game for disc production...? (i don't think these games will come with a code for 2/3 or anything)
Last edited: Aug 1, 2018

Regarding if they hadn't finished the other games in time, I'm pretty certainly everyone intending to buy the set on disc would happily wait instead of this disaster.
You must log in or register to reply here.
Share:
Facebook Twitter Reddit Email Link
Top