Crunchyroll Arabia has been busy...

Grabbed a few new shots from Crunchyroll's various socials as well. Good to know it is still worth promoting in their eyes.

renthusiast said:
I dunno if this has been discussed before (sorry in advance if it has been brought up before), but I don't think ryo knows that the guy in the Bailu pic is sunming yet. This probably because he did not show the picture to yuanda zhu when they were in the hideout. what made me realise it is how ryo was like "this man standing next to my father...he might be....", which kinda shows he doesn't know who sunming is.View attachment 16799
it might be an insignificant change, but I'm really interested to know why yu decided to change it🤔
Click to expand...

He doesn't show the photo to Zhu in the game either - he doesn't find out it's Zhao Sunming in the photo until Master Feng tells him so in Shenmue III. Of course, we'd all pretty much worked out it was Sunming way back in the day
OP
OP

I wonder why the Shenmue anime soundtrack didn't get a physical release worldwide? Just doesn't make sense this is easy money.

Today is a Diamond

I think that with all this WBD thing, second season will be a miracle again...
S

BruceWayne911 said:
I wonder why the Shenmue anime soundtrack didn't get a physical release worldwide? Just doesn't make sense this is easy money.
Click to expand...

Might be a consumer trends thing? Japan is famous/infamous for physical media holding on for a lot longer as the world transitioned to streaming.

Easy to import a copy though! Mine was remarkably quick and painless experience with CDJapan.

I honestly can't recall a single anime OST getting a western release off the top of my head, and I own about 100+ of the things

With the recent restructuring following the Warner Bros + Discovery merger it put into doubt the future of a tonne of their content.

Seems a couple days back they confirmed to GameRant that the Toonami Block on AdultSwim is here to stay.

This is great news as Shenmue obviously aired on here and could pave the way for the Season 2 conversations to start.

This scene is way better than the one in the game

savesup said:
This scene is way better than the one in the game

Its very well translated to anime, it feels different but familiar. I prefer skiping better-worse scheme.

Apologies if this has been discussed already, but did anyone see that Yu-san performed horns on this album?? Or is this another Yu-san?? 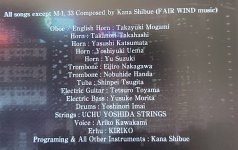 It'll be another Yu Suzuki.

Spaghetti said:
It'll be another Yu Suzuki.
Click to expand...

Wow, that's quite the coincidence

Welp, we're not getting season 2.

I know it looks like a death knell, but really what he's saying is that is that at least Adult Swim's involvement/financing for a second season was paused. They don't own the property, though, nor the studio that made the anime. Shit, they didn't even get merchandising in the deal. It seems like what they got for their part was limited broadcasting rights to the English dub.

I'm grateful to all parties involved for their contributions to the project, but Sega owns the property, and should be able to move forward if they saw fit. That's a big if, but my secret wish is that the anime did well enough in Japan that Sega sees it as something to supplement their burgeoning multimedia portfolio, and hands the anime over to Gonzo or Production I.G., with a real fucking director(!).

I honestly felt Shenmue deserved better, despite TMS probably doing some of their best work on Shenmue. It does hurt to read that tweet, though. Both for Demarco/Adult Swim family, and as a fan of Shenmue. Just don't throw dirt on it yet.

This hurts badly but we keep on fighting.

I'm sure this is down to Crunchyroll more than anything so we target the Tweetathon at them for #ShenmueAnime2 and also we watch the thing to death on there.

Give them something to consider.
S

Well, there goes our best chance to see the end of the story….this sucks so much

This hurts. But let's not forget that the show was critically acclaimed. Maybe it's just meant to be that Shenmue is loved, but isn't financially for the masses. As we've seen time and time again, things that are loved have a longer shelf life than flash in the pan things. Blade Runner. The Room. Neutral Milk Hotel's "In The Aeroplane Over The Sea". Scott Pilgrim Against the World. All "failures". All loved.

Never thought a corporate merger would provide such ill timing for future of Shenmue.

This is a huge blow for Shenmue and its disappointing because according to our inside source the show did good. I guess the one positive we can take from this is we got a anime in the first place. Not gonna lie the future of Shenmue is looking dimmer hopefully Yu or Sega can give us some good news soon.
You must log in or register to reply here.
Share:
Facebook Twitter Reddit Email Share Link
Top