Although I'm happy with what we have now. If Sega originally wanted to remake the entire two games, I don't understand why they wouldn't find it more efficient to have it done in house with the Dragon Engine. The budget that went to D3T could have easily went to the RGG team or even what's left of AM2 to remake the game.

The visuals look decent, but I can't help but to think that Sega would have been better off just remaking the game themselves instead of outsourcing. Either way, d3t did a hell of a job given the circumstances.

but i cant be mad at Sega. i dont know anything about the costs
and how well it worked in terms of technology and performance.
maybe it was just too expensive and Sega thought that they will never get that kind of money back -
i cant blame them for that. everyone wants to make profit.

there are a lot of cool demo / prototype games and videos out there and a lot of them never made it into a full game.
sometimes it just doesnt work out.

Sega have responded to yesterday's article:

"UPDATE 16/10/18 3:52pm: Sega has been in touch with a statement - "SEGA and D3T indeed had started exploring the feasibility of a full HD remaster for Shenmue I & II. That being said, we soon realised that this was a project with its own set of challenges. Working with original animations and characters but meshing them with enhanced HD visuals gave us a game that we felt would not meet the standards that Shenmue fans expect and deserve. Rather than going ahead with a release that may disappoint fans, we chose to focus on bringing the classic game to PC and modern consoles, so that new players could experience Shenmue's original charm."

The OP and topic title have been updated.

When you think about it, seeing a beautifully rendered, highly detailed new Ryo model that used the same body and facial animations as the original DC version would look pretty jarring. I'm sure that was just one of the mountain of issues they ran into before giving it the axe.

Today is a Diamond

Drakub said:
When you think about it, seeing a beautifully rendered, highly detailed new Ryo model that used the same body and facial animations as the original DC version would look pretty jarring. I'm sure that was just one of the mountain of issues they ran into before giving it the axe.
Click to expand...

That is one of the issues with the Kiwamis, some scenes keep the 2005-2006 animations with high detailed models.
C

Drakub said:
When you think about it, seeing a beautifully rendered, highly detailed new Ryo model that used the same body and facial animations as the original DC version would look pretty jarring. I'm sure that was just one of the mountain of issues they ran into before giving it the axe.
Click to expand...

They were working on this, apparently:


dark1x said:
Also worth noting - they were working on a new animation system that would have replaced all original in-game animations with a more advanced alternative. That wasn't yet finished when this video was made, unfortunately.
Click to expand...

I mean, it seems to me that this port was initially incredibly ambitious, way beyond any of us could have expected. While I said earlier that I don't consider it a "remake", I don't mean to downplay the work involved. Even modernising the rendering while using the original game engine would likely have been harder than doing it from scratch.
I think Sega and D3T were a bit insane to even embark on the challenge, so I can't be too mad at Sega for going "Hold on a sec" after two years of work and realising that they still had the hundreds of NPCs to go at least.

Now we can focus on the real issues...

Seriously, though, it would work so much better in VR than it did on the Wii or even the Dreamcast.

Also please bring Virtua Tennis 2 to Steam. Can replace all the tennis players with generic lookalikes, I just need it back in my life.
V

So, how much longer before the mods or Sega do an HD remaster of both games as originally intended?

Full mod community remakes of complex 3D games can take 5-10 years, and more often than not they run out of steam and are left unfinished. I have no idea how fans would even begin to recreate the fighting engine in Unity or UE4. It would be a monumental task.

I'm not sure remaking Shenmue I and II will be much of a priority now the originals are available. If they sell quite well and Shenmue III performs poorly, I don't think we see any more Shenmue from SEGA, apart from re-releasing this same version on other platforms into the future. If they sell quite well and Shenmue III is a success, I'm sure SEGA will try to muscle back in for Shenmue IV...even though I don't see SEGA Japan as a saving grace like some people seem to.

Even regardless of fans modding in such visual work, people are losing sight of the bigger picture here, in relation as to why such a remaster was cancelled.

Ok, yes, the footage from John's video looks stunning. It really does. But that's just one aspect of it all. What you see with your eyes. Sure it looks good, but when one thing looks good, it makes other things look horrid. So we have those current areas remastered. That means everything needs remastered, and Shenmue has tonnes of moving parts. You can remaster the buildings, the sky, the foilage and terrain... Then we come to every single building interior, which particularly in Kowloon is insane levels of work. Follow that up with Guilin too.
Since all the environments are being redone, in game items you can interact with need remastered next. Then every single non interactable asset.
Then the animations need redone to accompany this, to keep the product consistent. But by doing this, then every single character model needs redone, and what would be that number, over 1000?

With the bar raised, new facial technology may as well be used, and if that's the case, the voice over audio will need to be remastered to again, keep it all consistent. If the VO is being remastered, then it will make the rest of the general audio sound old, from the background music, cutscene OST, sound effects too. Add them to the list.
All of that then needs to be programmed into a nice little remaster, god knows combining what new code there is with the old code. Then it needs proper QA testing, which could take months, and all before a now set date of August 2019 when Shenmue 3 arrives.

But therin lies a whole other bucket of issues. Some we have already seen in this thread. People don't like the new remaster. They don't like the new animations, or the new look. It goes against the purity and soul of the originals. Ok. But also, with a more modern fresh look, how much more confusing is that, considering Shenmue 3 is as equally modern, but built on a different engine. With a different design team. The lines between the original games and Shenmue 3 become even more blurred.

Honestly, Sega and d3t made the right call. The old games are what they were, but on modern platforms, available to buy, for anyone who choses to do so. Shenmue 3 will have its own proper, modern and distinguishable look under the watchful eye of its original creator, and personally I wouldn't have it any other way. The stage has been fully set for Shenmue 3 to take the series into the future, and I am excited to see where it brings us.

orient said:
If they sell quite well and Shenmue III is a success, I'm sure SEGA will try to muscle back in for Shenmue IV...even though I don't see SEGA Japan as a saving grace like some people seem to.
Click to expand...

It all comes back to nostalgia -- people want the old SEGA back. They want the same innovative company who released the Dreamcast to publish Shenmue again, and they want Shenmue III to be the exact game Yu would've made at SEGA 16 years ago...but it's a fantasy. Times change, people change, companies change.

I think there's still the "dream" out there that SEGA will bring Shenmue back in-house after III, the Yakuza team will make Shenmue IV with their own tech, Suzuki and Nagoshi will ride off into the sunset together etc. etc. It's not going to happen.

Guess we now know where this image came from. 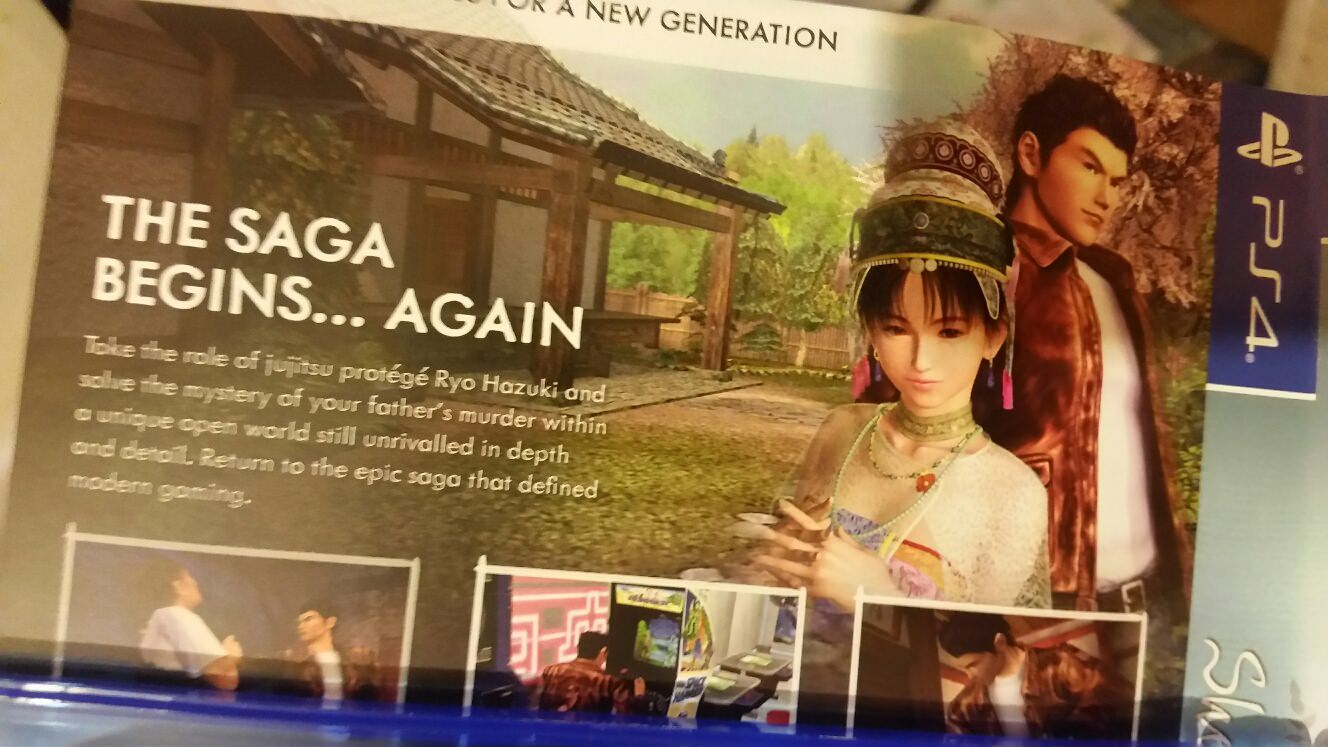 ShenSun said:
Guess we now know where this image came from.

shredingskin said:
Wasn't it around 10 million ?
Click to expand...

it was 28 million to be exact.

I would've assumed that dojo at the back of the box was an unused render. It was right on our noses all this time. It certainly has the dreamcast aesthethic/color gamut.

Kinda reminds me of this image...

Suzuki Yu said:
it was 28 million to be exact.
Click to expand...