I'm just amazed that a Shenmue cartoon is in existence.

If someone told me that such an adaption would come to pass when I was 20 years younger, I would've laughed at you.

They announced this way too early.

Reprise said:
They announced this way too early.
Click to expand...

I agree but I can understand why they did it. If they are shopping footage of IV to potential publishers, being able to say they have an upcoming anime of the property makes it a more enticing prospect, and they get to announce it on their terms without it being leaked.
OP
OP

Eh, we all know they're still working on it based on that recent studio tweet. I'm sure all will be ok when it's finally revealed. A second announcement will be just fine. I'll bet very few Shenmue fans even know about the anime yet...

Wow that dude is working on Uzumaki aswell. Thats awesome.

Loved the movie, had no idea they were doing an anime!

"Shenmue looking good" Who knew three words could bring so much joy. I'm VERY excited for this anime.

Side note: If anybody wants to get excited about the kind of thing we can expect, I would recommend checking out the reboot of Fruits Basket which was produced by TMS. The Japanese architecture / atmosphere is given a lot of love in that show. It's very very pretty and had me imagining how Yokosuka will look.

I'm remaining confidently optimistic about this project and truly can't wait for it to air. My partner is a big anime fan and as much as she appreciates Shenmue, it's just not her type of game so this will be her first time getting to experience the story. Hopefully this will be the case for many others and the anime can bring new fans onboard.

The music's the important part for me, it's such a strong part of the Shenmue experience. With Yu overseeing the project though, I have very few concerns.

Down by Law said:
The music's the important part for me, it's such a strong part of the Shenmue experience. With Yu overseeing the project though, I have very few concerns.
Click to expand...

Very true! The music is a huge part of the feeling. You'd hope with the sheer amount of Shenmue music (released and unreleased) in the tank they'll have no problems making it great.

Currently playing
The Last of Us Part II

Don’t want to hype anyone up again like last time but AnimeJapan is late next month and usually an avalanche of trailers and news come out during that time. Hopefully a Shenmue preview is shown. They have appeared at the event back in 2016

Currently playing
The Last of Us Part II

The Hero Spot said:
Don’t want to hype anyone up again like last time but AnimeJapan is late next month and usually an avalanche of trailers and news come out during that time. Hopefully a Shenmue preview is shown. They have appeared at the event back in 2016
Click to expand...

But like I said don’t get hyped, its just wishful thinking

P.s an interesting tidbit: Fruits Basket S2, the latest anime by TMS / Telecom just won Best Drama at the Crunchy Roll Anime awards yesterday. Further cementing my confidence in them to, as SEGA put it "make something respectable."

Even after all of this time, my original concerns about the anime that were there when it was announced are still there today. It's incredibly rare to find a 13 episode anime that doesn't feel rushed. I just don't know how they will manage to break that cycle with Shenmue, especially seeing as they plan to include parts of Shenmue 2 in it.

My biggest concern is them telling the story but failing to flesh out the characters. With a 13 episode anime, I am struggling to see how they can avoid this issue. When playing the games, you can get through the story quickly if you wanted to, but by doing that, it all feels so hollow. By talking to the characters and learning all of these little details about them, it makes me care about them and the Shenmue world. This is impotant for Ryo's character more than anybody else because it was through all of these conversations that I started to care about him. If that is reduced to 10 second cameos, then it's going to lose so much of what makes it so special.

It kind of reminds me of Sonic X. Around the midway point of Sonic X, they covered Sonic Adventure 1 and 2 in only 12 episodes, it felt really rushed and I remember being annoyed about it when I was younger. Shenmue's story is much deeper and relies a lot more on the characters than Sonic Adventure 1 and 2, so I just don't see how they can possibly tell this story in a satisfying way with so few episodes.
OP
OP

My take is, at least it’s being made. Certainly never expected it at any point in the past twenty years, so I welcome it.

That’s not to say I’ll love it no matter what, but I am staying optimistic since this is far beyond anything I expected at any point in my enjoyment of the series. And it could be huge for the games.
Last edited: Feb 22, 2021

Kenzo38130 said:
I cant wait for shenmue the animation so i can watch it with friends who doesnt know about shenmue
Click to expand...

Yeah, this is definitely one of the reasons why I'm excited about the anime! It's going to be much easier to convince people to watch an anime than to play some 20ish year old games.

It's a really accessible entry point into the franchise.

Hope they end up making a Shenmue Anime Collector's Edition similar to this one. 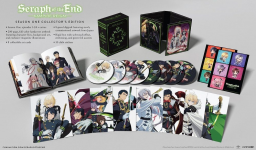 Check the trailer for this Anime that is coming to Netflix; looks like a good one for Shenmue / Yakuza fans and househusbands to watch.


Didn't know that this anime was an adaptation of the TV series; I've got to watch this; looks great.