The Ghost of the Ghost Hall Building

I'm not even sure why I had picked up Shenmue originally, maybe it was a Game Informer magazine or some kind of Dreamcast demo disc. It was early 2000, and the game was just released. After a number of hours playing it, I realized that I was playing the future. There were really only two moments which gave me this experience. When I was playing Sonic the Hedgehog 2, Ecco the Dolphin and NHL '94 for the Genesis one day, and the next, I'm in Resident Evil 1 getting chomped in half by a giant snake. The second and final time was when I realized you could leave the Hazuki Dojo in Shenmue and there was a living, breathing world to explore. So I played it and loved it, I won't go into the details of that, but it was a magical experience in my gaming career.

I knew I needed to play Shenmue II somehow, and I wasn't going to wait a year for some Xbox port, since I don't own an Xbox (and never will, because of this, to this day) So, I imported the European version, and got it running using a boot disk. This was very late 2001, December. I successfully got the European version running, but between the lack of Ryo's English voice dub, and it running like junk on the Dreamcast, actually, I didn't prioritize playing it.I made it quite far into the game, up to the point about 2/3rds in, when Ryo is in the Ghost Hall Building.

As you know all too well, Ryo is tasked with getting across deep chasms in a condemned building by walking across a large series of planks.They kept throwing the QTE function at you over and over, maybe 6-7 times at least. I kept dying on one section in particular, and it was annoying. So between me having trouble completing it, and I believe I also had to go outside and clear a recent snowstorm (it's December of 2001 remember, pretty early for snow), I decided to stop for now and come back to it after I went outside. 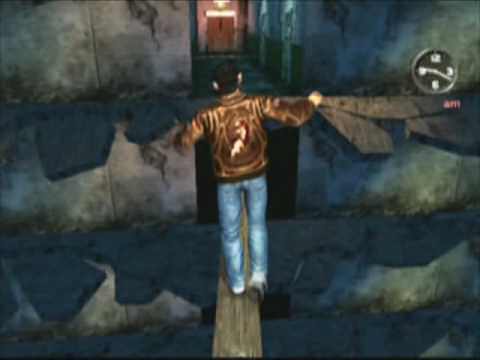 ​
After I shoveled the driveway I must have eaten dinner, maybe I went onto another game for a while, I had a PS2 at the time and good games were coming out for it. Then I started playing DDR a lot with a friend, and we played a lot more, and then I met a girl and we dated, and moved in together, and she went to college. That inspired me to go back to college, so I went and got two degrees, and re-entered the workforce in 2010, had some other relationships and then worked for a few years and met another girl, and we moved in, got married, and was living my life.

I had thought every now and then, like once every few years, that I still didn't know how Shenmue II ended. My personal incarnation of Ryo was still waiting on a cliff's edge, waiting try and cross those stupid planks one more time. By mid-2017, a combination of four factors aligned themselves:

So in July 2017 I finally sat down and started from scratch on Shenmue II. I secured the special Dreamcast version that someone meticulously edited to insert the English dub from the Xbox version into a European Dreamcast version. I did this to help my immersion into it.

As the days and weeks passed and I was getting further into the game, I recall seeing the Ghost Hall Building in the game's world, but couldn't access it yet. I wondered if that was the building I left off at. (I had since forgotten the name of the building with the planks.) I remember an exhilarating feeling as I knew I was getting closer and closer to the point at which I never made it before. And then I finally got to the planks.

I took my time, despite that I was now 38 years old and not 23, and my tastes have changed a little, and my life's changed a whole lot, and my reflexes are slower. I crossed those planks with the patience of an adult in contrast to the gamer rage of a kid not really going anywhere in life.

I beat Shenmue II on a Wednesday, August 9, 2017, nearly 16 years after I started playing it. As I loaded up my old VMU and saw my old game save from a previous life, it was a glimpse back to who I was back then, in another life. The ghost was hidden from me in a Rubbermaid storage container for over 15 years, and I finally revealed it, here it is: 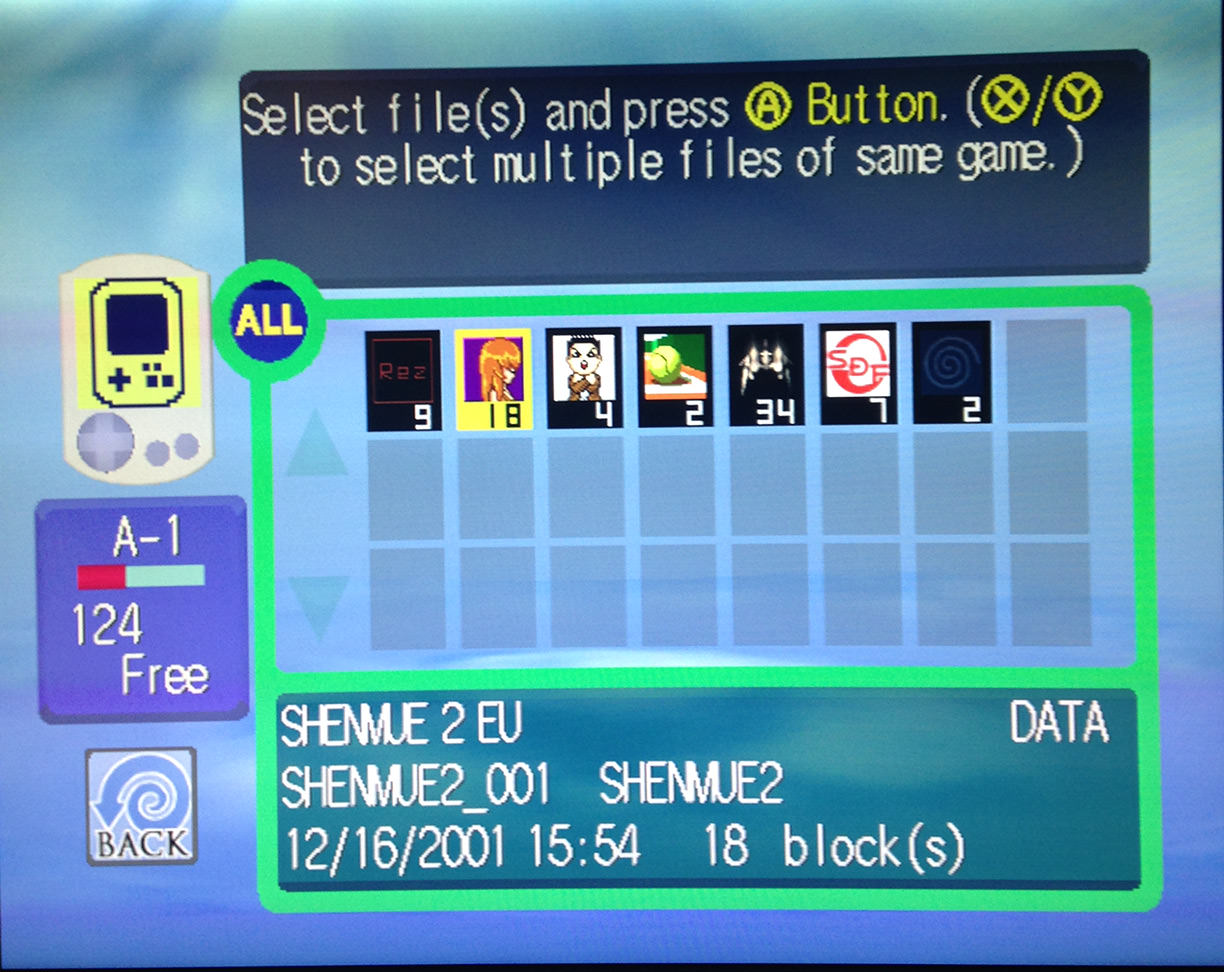 ​
When I beat the game, I sort of got the intended cathartic feeling of completing unfinished business that I hoped to get after such a long absense. What if it didn't snow that day back in 2001? What if I sat down and finished the game back then? Would it have mattered today? Would I have replayed the game today? Does any of it really matter?

With our first child on the way in December 2018, it's going to be really interesting to see when and how I play Shenmue III. I could be stuck in a village's puzzle and have to change a diaper, and then mow the lawn, and then cook dinner, and Ryo spends then next 16 years on my hard drive, stuck in what is essentially and symbolically a locked room, along with the ghost of my gaming past, but the Ghost of the Ghost Hall Building won't be there to taunt me, that one has been set free.

Excellent post to kick off the new site. And just excellent in general.

Incredible story and great read. Glad you were able to finish it after all those years!

Great write up dude, thanks for sharing! Glad you finally got to see the ending of Shenmue 2, you can do it all again in a few weeks time, and you're now ready for Shenmue 3

newyokohama said:
When I beat the game, I sort of got the intended cathartic feeling of completing unfinished business that I hoped to get after such a long absense. What if it didn't snow that day back in 2001? What if I sat down and finished the game back then? Would it have mattered today? Would I have replayed the game today? Does any of it really matter?
Click to expand...

Shenmue has changed my life in many ways for the better. I'm sure on at least some small level for you, it matters. But feel blessed! Instead of waiting on a cliffhanger, you waited on yourself, which must be a much better feeling lmfao
OP
OP

thanks everyone! love the feedback, and yeah @iyapol luckily my cave wait is much shorter. :-)

@Kodama couldn't have said it better!

newyokohama said:
thanks everyone! love the feedback, and yeah @iyapol luckily my cave wait is much shorter. :-)

@Kodama couldn't have said it better!
Click to expand...

There's light at the end of the cave!

I always like reading peoples Shenmue stories and yours is no different.

It's amazing to think that after all that time you still wondered about the finish. Now by the time you finally finished it 3 was already announced. What did you make of the ending for 2?

Yeah so for all those years, I figured maybe the game progressed in Kowloon a lot more and ended there. I didn't even know the whole Guilin area existed until maybe 2016.

As for the ending, one of my favorite parts of Shenmue was the slice-of-life aspect, the everyday common person sort of thing. It's the same reason why Great Teacher Onizuka is my favorite anime, just random slice-of-life stuff. When I saw some magic start happening, it took me out of the moment for a bit, but I was intrigued nonetheless. I'm excited to see where this goes!

@newyokohama it's good to see people from over the years coming and signing up here. Hope to see you around more.

I'm glad you liked the ending and haven't had to experience the wait we have lol. I'll never forget finishing the second game for the first time.
OP
OP

@spud1897 it's actually a massive cliffhanger, haha. It's like if Solid Snake walked into an airplane hanger, and new and dangerous Metal Gear bursts through a wall, annnd that's where it stands for the amount of time for a toddler to get a driving learner's permit.

@newyokohama I can see your point. But it doesn't detract from your story which is just brilliant.
OP
OP

Thank you! it's been quite a ride. Feel like the days of making my own graffiti's for Jet Set Radio and downloading them via the modem were quite a lifetime ago. I'm really glad I made it to the end of II, Now I can do it all over again.

P.S. I've never done a duckrace, don't even know how to access it, and don't even know what the "duck" is in this scenario, so that's one more thing to experience for the first time with the HD release. :-)

@newyokohama Ah the Duck races. It is literal for actual duck racing.

However there is probably a more through link around on the internet or ask on here.
OP
OP

Thanks! I'll come back here when the time is right. :-)

However there is probably a more through link around on the internet or ask on here.
Click to expand...

It's funny, I found duck racing naturally on my first playthrough, but I didn't learn about the ability to get your own duck and race it until like 2015 lmfao. The only hint is a line from Fangmei stating that there's some bird in the area or something and I never gave it a second thought, nor did I ever try catching leaves past the point where you need to...
You must log in or register to reply here.
Share:
Facebook Twitter Reddit Email Share Link
Top