bcdcdude said:
I am cautiously and deliciously excited, because i'm pretty certain 110 know what they're doing (they must know fucking around with Shenmue fans is not a good idea), but on the other hand, i'm thinking about the whole 'Abandoned' Blue Box debacle, so trying to keep expectations in check.
Click to expand...

That's what concerns me or gives me pause. They seem to be encouraging and courting attention and as a Shenmue fan that's been burnt more times than not, I like to temper my expectations until I see it officially announced.

Honestly, this sounds selfish but I’ll be so frustrated if this turns out to be a new IP and not S4. We need to keep the momentum from S3 and the anime…

Lol, I have a dangerous habit of getting gossip sites to pick up on weird stuff. Remember the Lakshya Digital rumor? Hey, just trying to keep all of us motivated. The more times Shenmue pops up in the news the more we prove it’s very alive.

Miles Prower said:
Honestly, this sounds selfish but I’ll be so frustrated if this turns out to be a new IP and not S4. We need to keep the momentum from S3 and the anime…
Click to expand...

I totally agree. The window and momentum to get Shenmue 4 is now, especially with the anime out. If they do something else it makes the anime release even more confusing.

Some may say perhaps they couldn’t get publisher on board with a proposed Shenmue 4 or they need funds from new game to help studio stay afloat. Those definitely could be considerations I just hope that S4 is top priority in every way. 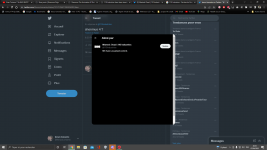 PeterKWilson on the twitch livestream found one of the people of 110 on the linkedIn. Their only post is leaflet outlining 110 Industries.

On the third page, it says this:-

"We outsourced the production of our first games to Japanese Studios, but we are also considering acquiring a Legendary Player in the industry to develop future licenses of our own".

Shit is so crazy if this is all true 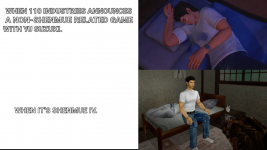 It doesnt make much sense to tease us Shenmues fans and start a ongoing hype level
because a large potion of the userbase
will simply be dissappointed if it ends up being something completely different than Shenmue.
So i hope they know what they are doing. Its not a great idea to play with a userbase
that has to reach for every little straw they can get for years now.

As much as I want Yu Suzuki's self acclaimed-yet to be developed masterpiece wine tasting game, he can add it as a minigame to Shenmue 4!

Yu Suzuki is indeed working on something that should be announced at the end of the year, so it could be related to 110 Industries.

Of course let's hope it's Shenmue 4, personally I want to see also brand new games from Suzuki-san, but honestly they should not waste the momentum created with the game (even if it's already 3 years) and the anime.

Anyone else picturing some poor Social Media Intern getting called into 101 Industries' Executives' office to explain why they decided to take it upon themselves to tease Shenmue 4 on Twitter?

They probably had no plans for Shenmue 4 whatsoever and now they're shitting themselves thinking they have to do it now, otherwise they will face the wrath of Shenmue fans.

But seriously, I hope and pray something is brewing here. I mean, there's fucking about and teasing, and there's this... I really hope it isn't just an overexcited social media rep.

The series saw an unprecedented revival with the well-received and sold Shenmue HD re-release, plus Shenmue III.

The anime seems to be very well received and again, the Dojo is only a small part of how many fans this series has.

I'm not sure who these people are, but it seems like they know combat, something that many derided Shenmue III for lacking comparatively to the originals FREE Battle system, training, et cetera..

Shenmue IV to me has been a given for some time and is a series pretty close to the vest for Sony since E3 2015.

They haven't spoken in a while either about their upcoming stuff past Ragnarok...maybe it appears in a Showcase this year?

Am I the only person who has never heard of 110 Industries before?

Cobra Kai really did wonders in delivering martial arts stories to mainstream. I hope next SM game will be remembered for great story-telling and smooth gameplay experience!

Keeping my big mouth shut other than to say I'm so happy to see how excited the dojo is right now.


Nathanial Essex said:
Am I the only person who has never heard of 110 Industries before?
Click to expand...

They essentially made their public debut last year. The reason most of us know of them is because Yu kicked off their big TGS demonstration.

I'd just like to point out something that I noticed just now.

A quick Google search just on 110 Industries Games resulted in quite a few articles speaking on their teasing of Shenmue IV, so more than just one outlet has now picked up on it.

Interestingly, they don't seem too quick or keen to put the kibosh on it, which I would expect them to do fairly quickly, if it were NOT the case, or even not the case *right now*, with chatter and articles mounting

I think they’re just capitalizing on the fanbase getting flustered. They may have something going on with Yu Suzuki but, as much as I want it to be Shenmue related, I think he’s probably a producer or adviser to something non-Shenmue.