Rydeen said:
Same! I've been seeing the light boxes on people's shelves, and coveting them. Also, I love the idea of having a Dreamcast case for it.
Click to expand...

Friggin' hell, man. I contacted LRG twice about my order status, after I hadn't received a shipping update; Once a little over a week after placing the order, and again over a month after placing the order. Finally after the second time, they shipped it out to me, and I received it, but then I got another shipping email, under the same order number, but with a separate no-cost line item for a Shenmue III card. I figured, 'Oh, they're probably just sending me a small item to make up for the time it took. Cool.'

No, they actually sent me another entire collector's edition set (along with a holofoil Shenmue III card). WTF.

EDIT: Well, no response since trying to contact them about it two weeks ago. I guess I'll have to start thinking about what I want to do with the extra.
Last edited: Nov 5, 2020

$9.99 and the steelbook is included once added to your cart, although some were reporting some trouble with that. Worked for me.

Shenmue 3 Digital Deluxe Edition is currently 80% off on the PSN store during their Spring Sale:

Shenmue 3 is part of this months Humble Choice on Humble Bundle. 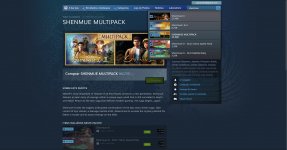 It was about time they came up with this bundle; hope we get some good sales with this deal; makes me more confident about Shenmue IV becoming a reality.
OP
OP

Would love to see that on PS4. I think selling all 3 games in one package is brilliant.

Pretty crazy when you think about it really. I've never really seen a bundle like this on Steam before too come to think of it.

Shenmue I & II are published by Sega, and Shenmue III is Deep Silver (I guess Sega in Japan). Means at the very least, that there is a line of communication open between the two of them which is great news lol. Nice to see!

Part of me is dreaming that a Shenmue trilogy Switch release is inbound, but I think it’s far more likely that one or both of the games will be coming to PS plus next month.

tomboz said:
Part of me is dreaming that a Shenmue trilogy Switch release is inbound, but I think it’s far more likely that one or both of the games will be coming to PS plus next month.
Click to expand...

That would be a really good move to put them all on PSPlus.

Could easily pull in some new fans which would be great. Or they could time it for a trailer from the Anime if they showed one at Crunchyroll Expo in August

mjqjazzbar said:
Would love to see that on PS4. I think selling all 3 games in one package is brilliant.
Click to expand...

Steam does this a lot with games series. They even have publisher collections like Eidos Anthology. I got 51 games and all DLC for those games for just under £20.
S

Game is offering shenmue 3 for £5 & £5 p&p for each order, but this also includes the steelbook as well, so not a bad deal.

Shenmue III is currently £4.99 the complete DLC is £4.79 and the story quest DLC is £1.64 as part of Playstation's Blockbuster Games sale. For what it's worth, it's nice to hear "Shenmue" and "Blockbuster" in the same sentence...even if the game is right at the bottom!

Play as Ryo Hazuki, an 18-year-old Japanese martial artist hellbent on avenging his father’s death. In this third installment of the epic Shenmue series, Ryo seeks to solve the mystery behind the Phoenix Mirror, an artifact sought after by his father’s killer. His journey takes him to an...
store.playstation.com

This complete Shenmue III DLC collection conveniently delivers all post-launch DLCs in one package. Save money on content for this game by purchasing the Season Pass. Content can be downloaded from the PlayStation®Store or in-game once it is released.
store.playstation.com

One day, Ryo encounters Zhang Shuqin - a subordinate of Zhu Yuanda, who had helped Ryo out in the past. Just as Ryo thinks that hes renewed an old friendship, he learns that Zhang has been kidnapped. But by whom - and why You must have reached Niaowu or have save data on which the game has...
store.playstation.com
You must log in or register to reply here.
Share:
Facebook Twitter Reddit Email Share Link
Top