Blatantly Ziming. I'm just wondering how Xiuying would be drawn back in to the plot. I get the impression she wouldn't want to get involved, or be anywhere near, the insanity unfolding in the CYM's war, and she's above all that.
M

I think it's actually a Puppet.
The image right after it in the video, which you posted below, has the exact same hands on the smaller figure, and the figure right by her(?) is much larger and seems to have one arm positioned right behind her.

Plus, the lines on its mouth look puppet-y to me. Which leads to the bigger question...why is there a puppeteer character in Shenmue? How do puppets relate to Martial Arts? Is the puppeteer even a martial artist at all? Are they important, or just another weird side character Ryo meets? More mysteries to boggle the mind.

Where the fucky fuck is Shenmue 4?
S

Unreal Engine 5 is now available in early access. Looks like it has some amazing features that would work great with Shenmue, including the maturation of tools recently added to UE4 like control rig.

Really glad Yu Suzuki has already stated intention to use the engine in a future game.

So it seems according to a slip-up that Bloodstained is getting a sequel, so that bodes well for Shenmue getting a second go around in my opinion.

Valascaziel said:
So it seems according to a slip-up that Bloodstained is getting a sequel, so that bodes well for Shenmue getting a second go around in my opinion.
Click to expand...

Seems to have slipped out in some financial meeting slide. They've had that happen once before(whomever published Bloodstained).

I conjectured that it bodes well for Shenmue to continue because Bloodstained was also a Kickstarter game, similar to Kingdom Come(which also has a greenlit sequel). It saw success, but it wasn't a total barn burner.

It is a different publisher(505) so on its own it means nothing, but it's best to hold on to any hope as fans of the series.

I've always maintained that the hard part was getting III off the ground. 3 was the obvious bridge to get us to 4.

There's a demand for the franchise and our passion as fans more than proved that to the world. Also with the upcoming anime I believe that we are in a good place with the IP going forward.

I hope we get a interview or even a general update from Yu before the year is over about what he's been up to or even how his studio has been doing.

It would be so cool and I would be so ecstatic if we got confirmation about IV being greenlight possibly in the Fall or Winter next year before or after the anime airs.
C

Valascaziel said:
Seems to have slipped out in some financial meeting slide. They've had that happen once before(whomever published Bloodstained).

I conjectured that it bodes well for Shenmue to continue because Bloodstained was also a Kickstarter game, similar to Kingdom Come(which also has a greenlit sequel). It saw success, but it wasn't a total barn burner.

It is a different publisher(505) so on its own it means nothing, but it's best to hold on to any hope as fans of the series.
Click to expand...

I think it has nothing to do with whether it's a Kickstarter game or not. Mighty No.9 was also a Kickstarter game but the sequel never happened. Bloodstained made big money (€30m revenues) and the publisher 505 Games was very happy about it. Its sales have met their expectations. That's why it got a sequel. In terms of Shenmue, its performance was below Deep Silver's expectations so I don't really see how Bloodstained's success bodes well for Shenmue. If anything, it tells us that a well-selling title is more likely to get a sequel and unfortunately Shenmue is not the case. 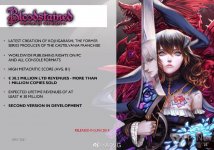 Surrounding Bloodstained: the game literally had me at hello knowing that Iga san is its creator. However, bear in mind that there almost isn't an existing Kickstarter game or non-game project that had problems. Iga san originally planned to release it in 2017, but there were so-called drama exposees who were pointing at flaws, such as the art direction and the "sluggish" development time, when in reality they - the backers were the ones who spoke up just how much they care for Iga's talent and decided to prolong the development thanks to the stretch goals. Then along came Covid, causing the delivery of backer rewards to either fall through, or get them delayed. And guess what happened? The exposees STILL aren't happy due to the backer rewards and are urging others to boycott any other Iga's projects, but alas to them: the game sold over a million copies, and it has an unfinished "encore" development roadmap and it boasts a really high user and critic score.
My advice to drama seekers? Just keep your pie-holes shut and wait.

I just grow weary of the negativity. Try to take and extrapolate positivity and in they come to essentially say "Nope not gonna happen", even though DS said it performed "fine" financially and is a core niche product, similar to the Atelier series.

We waited 15 years to even *get* 3. With the anime forthcoming, I think we'll likely get Shenmue IV. The chances are much higher than they were for so many years.

E3 is around the corner. I don't know that it'll be at this show, however. If COVID hadn't happened, I would've felt better about already hearing on Shenmue IV.

Gamescom is my bet if it happens this year; if not, I'd say it'll be announced or teased as the anime ramps up, say a teaser or trailer for the anime, to drive hype.
C

Well I was just trying to say that objectively the success of Bloodstained had not much to do with Shenmue even though both of them are Kickstarter games, but as a Shenmue fan I sure hope something will happen in the rest of the year.
Last edited: May 29, 2021

We do know Shenmue did financially fine so that's something, We shall see.

I think that if something is happening or if the game is currently in development, i believe we wont get any announcement soon or at least until they have something very solid in their hands and that will generally give a positive impression of the game.
They should avoid at maximum cost not to bring something out like that gamescom trailer in 2017.
If they are going to release something I believe it will be prior or by the same time the Shenmue Anime comes out.

I don't know the current state of the Dragon and Phoenix project but if it were to come out by the time the Shenmue Anime is released that would be the cherry on top of the cake.

Deep Silver & Koch are still pushing the Shenmue name on their social media accounts. They have tons of games in their catalog that they don't continue to push. Even Sega seems to constantly flirt with the Shenmue fan base, a fan base many of us in the doom-and-gloom portion of our lives seem to believe no longer exists in large numbers. Why would Sega bother?

Take that as you will. If Shenmue generated no revenue or profit for this company, they'd quietly kill it.

Ys Net has not officially disbanded or announced they've ceased development. What are they developing or supporting at this point?

These newer-styled publishing houses have a different strategy than the Nintendos and Sonys of the world.

My outlook is generally positive for all the reasons mjq just listed. The only possible negative I've seen recently is SEGA didn't mention Shenmue in their "IPs we're considering to revisit", and it was a fairly long list that included series that have had recent releases, such as Panzer Dragoon. But to me this very much "tell me something I don't know". Just because they're producing an anime, it doesnt mean they're willing to back a new game. That hasn't changed.

Shenmue may be a SEGA property but it'll be up to other publishers to make IV a reality in my opinion. The glorious return to SEGA ain't happening
M

Something I rediscovered while looking through threads on the old Dojo, Tak Hirai (one of the lead programmers of the series) mentioned in a pre-S3 interview that the team wanted to include a sword fight somewhere in Shenmue Saturn!

JM: What made you move it from the Saturn to Dreamcast? Was it because the Saturn was dying in terms of sales? Or was it that you realized you needed more powerful hardware to realize the game?

TH: The timing. The Saturn was coming to an end.

YS: Yeah, it was coming to a point where didn't make sense to release a game on the Saturn.

TH: There was also talk that the Dreamcast could handle the sword fight that we wanted to include in the game so we decided to reprogram the game for Dreamcast. We were also able to give input on the development of the hardware to match the game.
Click to expand...

Something to look forward to in 4?

Mole said:
Something I rediscovered while looking through threads on the old Dojo, Tak Hirai (one of the lead programmers of the series) mentioned in a pre-S3 interview that the team wanted to include a sword fight somewhere in Shenmue Saturn!


Something to look forward to in 4?
Click to expand...

Interesting! Maybe we will get sword fight and original Lan Di model that had his hair untied so it was long and flowing (The Saturn of course didn’t have power for hair physics) in a prospective Shenmue 4. 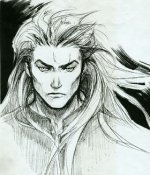 code l name said:
Interesting! Maybe we will get sword fight and original Lan Di model that had his hair untied so it was long and flowing (The Saturn of course didn’t have power for hair physics) in a prospective Shenmue 4.